As always, this is one of my favorite races to bring people to every year, and especially great to introduce new people to the sport. I was pumped that this year Evan and I would be showing our friend Rob what the sport was all about, and of course my dad, sister, and her boyfriend JP would be reprising their role as team “Directionally Challenged”. We planned on racing as a large 6 person mega-team again and just enjoying the day. The weather was supposed to be… interesting to say the least. Leading up to race day temps were projected to start below freezing and never go above 0, with 20-30 mph winds making it feel closer to -30 degrees. Rob informed me of the fun 30/30/30 rule, at -30 degrees, with 30 mph winds, you get frostbite on exposed skin in 30 seconds! Fortunately it wasn't going to be that cold, but it was going to be colder than I’d ever raced before.

We were all strategizing what we were going to wear at the start given the temps. Knowing exactly what I like wearing when the weather is in the lower 20’s, I opted for compression shorts, a mid-weight wool base layer, and my shell on the bottom. For the top, a skin-tight synthetic base layer, then a long sleeve synthetic, then my shell.

I’d been experimenting with some different food options over the last few races too, and I opted for Pop Tarts all day instead of my usual Snickers bar addiction. Keeping my fingers crossed they wouldn’t freeze completely solid over the course of the day! 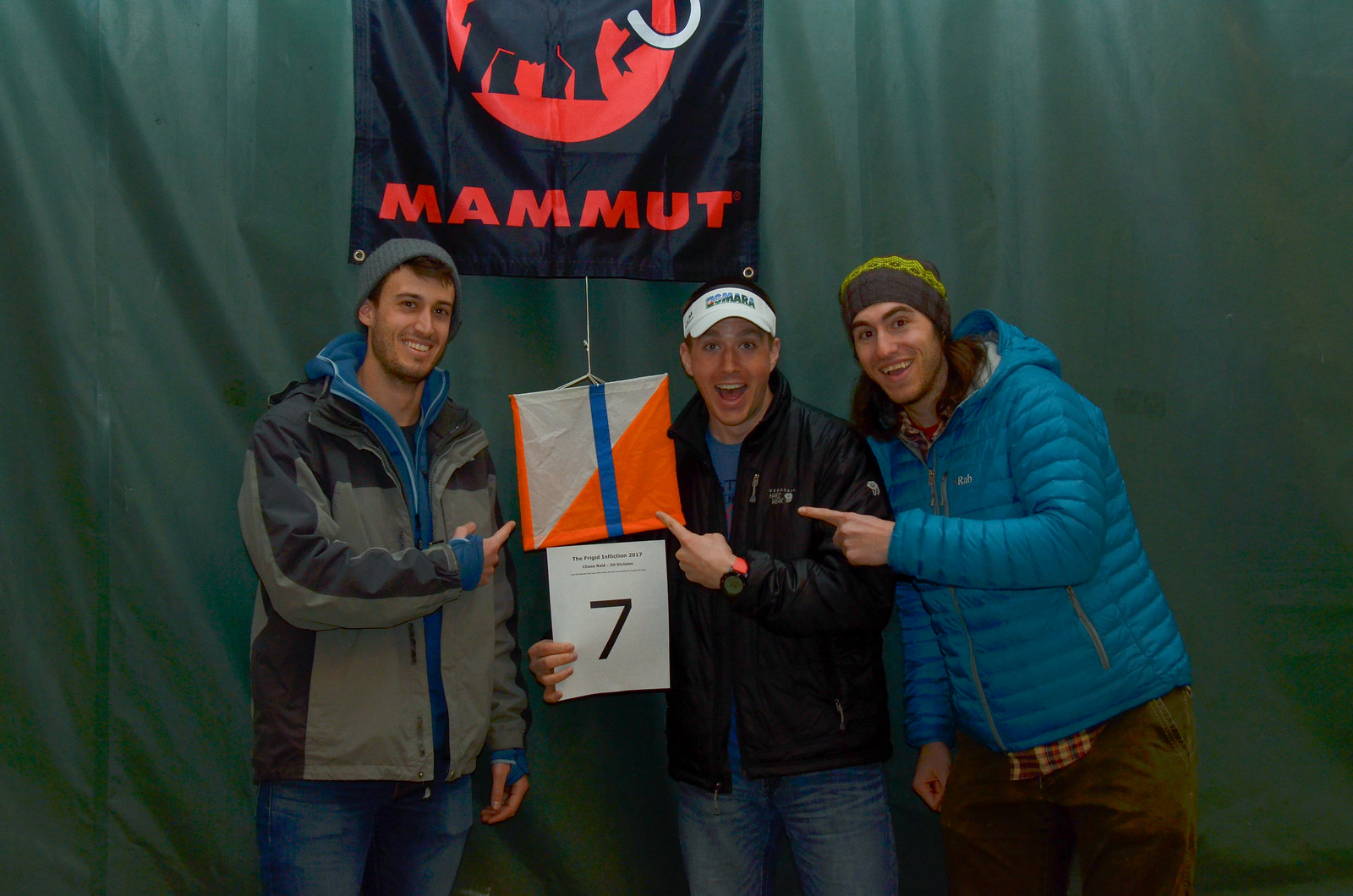 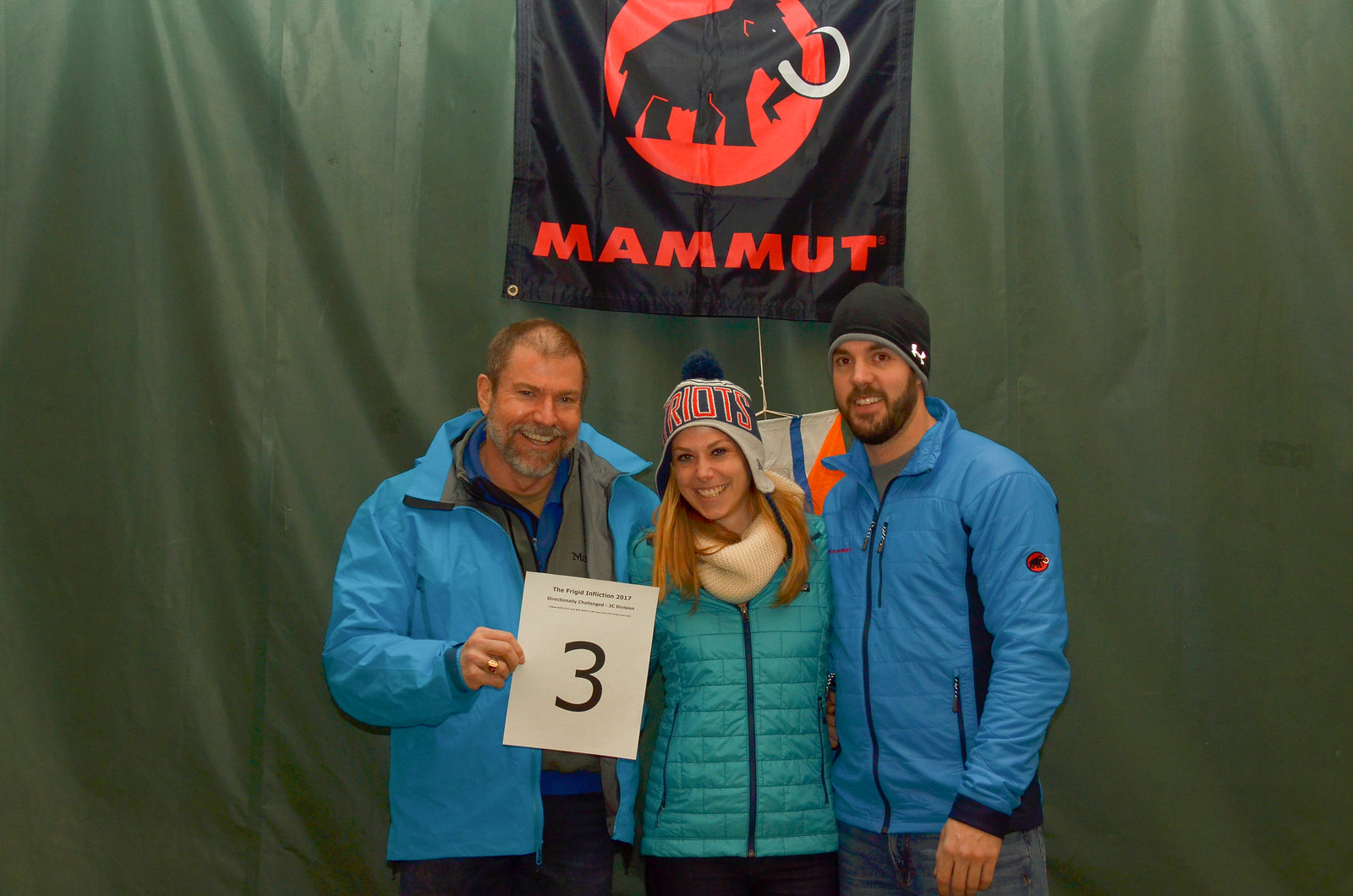 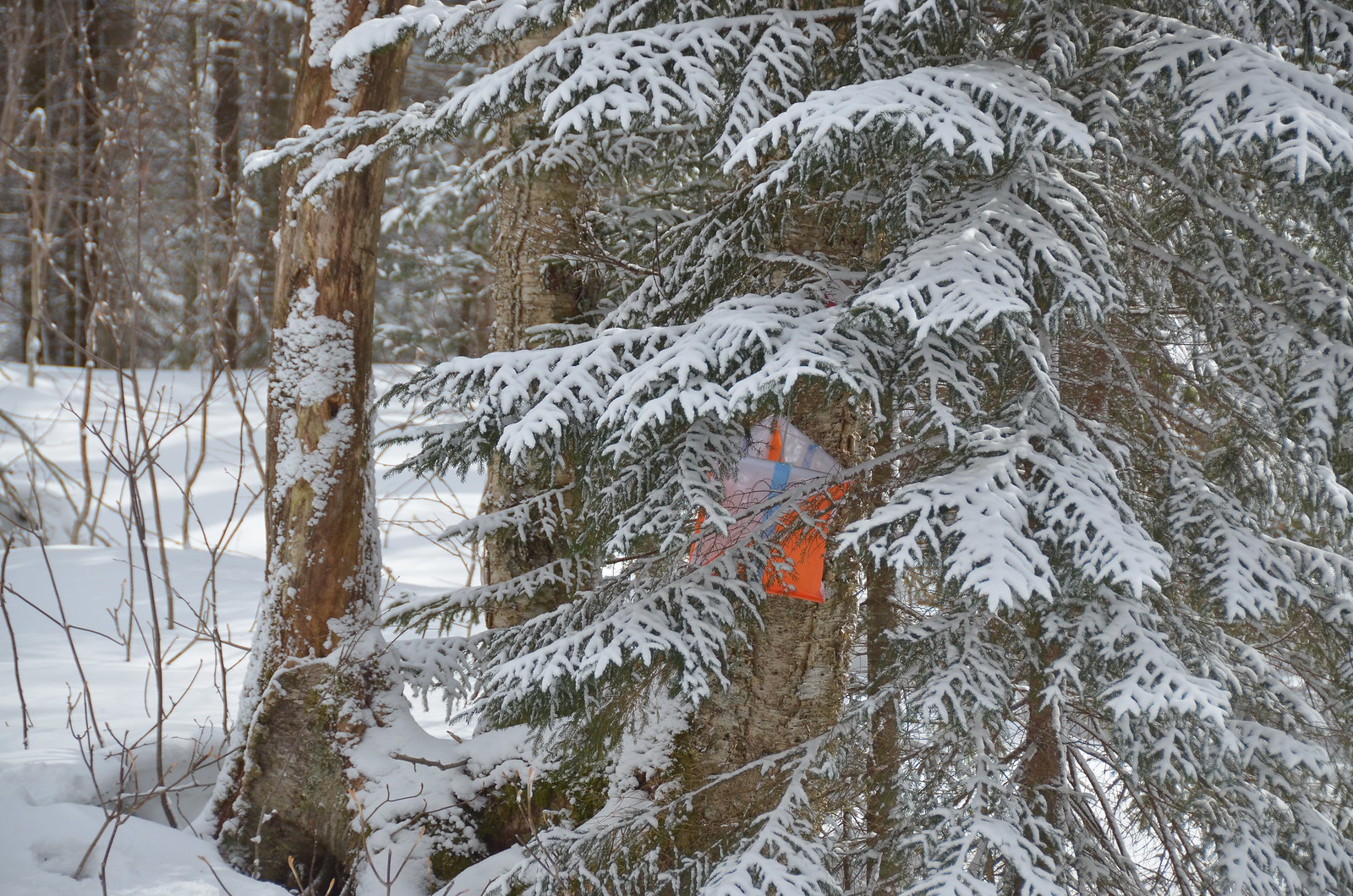 Checkpoints in the woods!

As usual, we arrived a little early for the pre-race briefing to get our maps and figure out what the disciplines were going to be. Prior to arriving due to the state of the trails, we knew we were going to have the option of picking 2 of the three disciplines available to us during the day. We opted before even arriving that we’d forgo the XC ski section, and stick to snowshoes and postholing for the day, thinking that the trails would likely be pretty packed down and we all move faster on foot. 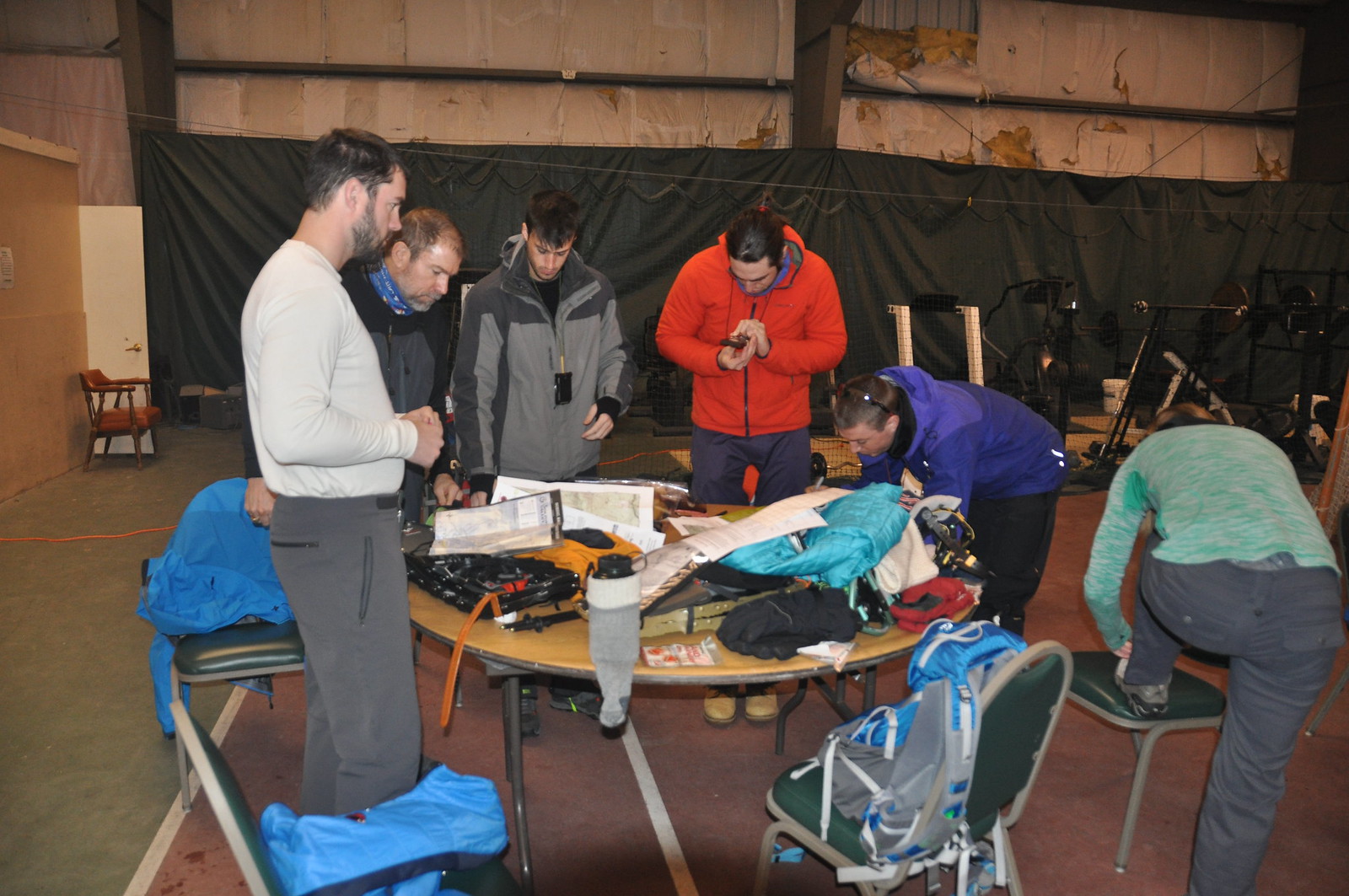 We learned that for the race we had to start the day with one discipline and get at least 5 checkpoints, then come in and switch disciplines and finish off the race. As a team, we decided we’d start on snowshoes and get 5 as fast as possible, then switch out to microspikes and do the rest of the race on foot.

I quickly got to work marking the map, rapidly had the points transposed from the topo map to the trail map. Evan copied them over to his map so he could practice backup nav, and we headed out to the start line.

Our initial approach was to hit CP 1, the cross the stream and get 2, 19, 3, and 4 in that order. That would put us right back at the TA where we could transition. We got to CP1 very quickly and made our way down to the stream, and quickly realized that we had a problem. The warmer weather from earlier in the week had melted a good deal of snow, and the stream was flowing incredibly fast with no good places to cross over. We made a quick pivot and decided that instead of jumping over the river, we’d continue SW and hit 5, 6, then go back to 20, and 4, and then transition.

This plan was good, but slow going as we were traversing the bank heading right down to the river. There were a few super sketchy icy areas we hiked through, including one right at CP5 where Colleen wiped completely out and were it not for her grabbing a tree quickly she would have landed right in the water! Good catch Colleen! 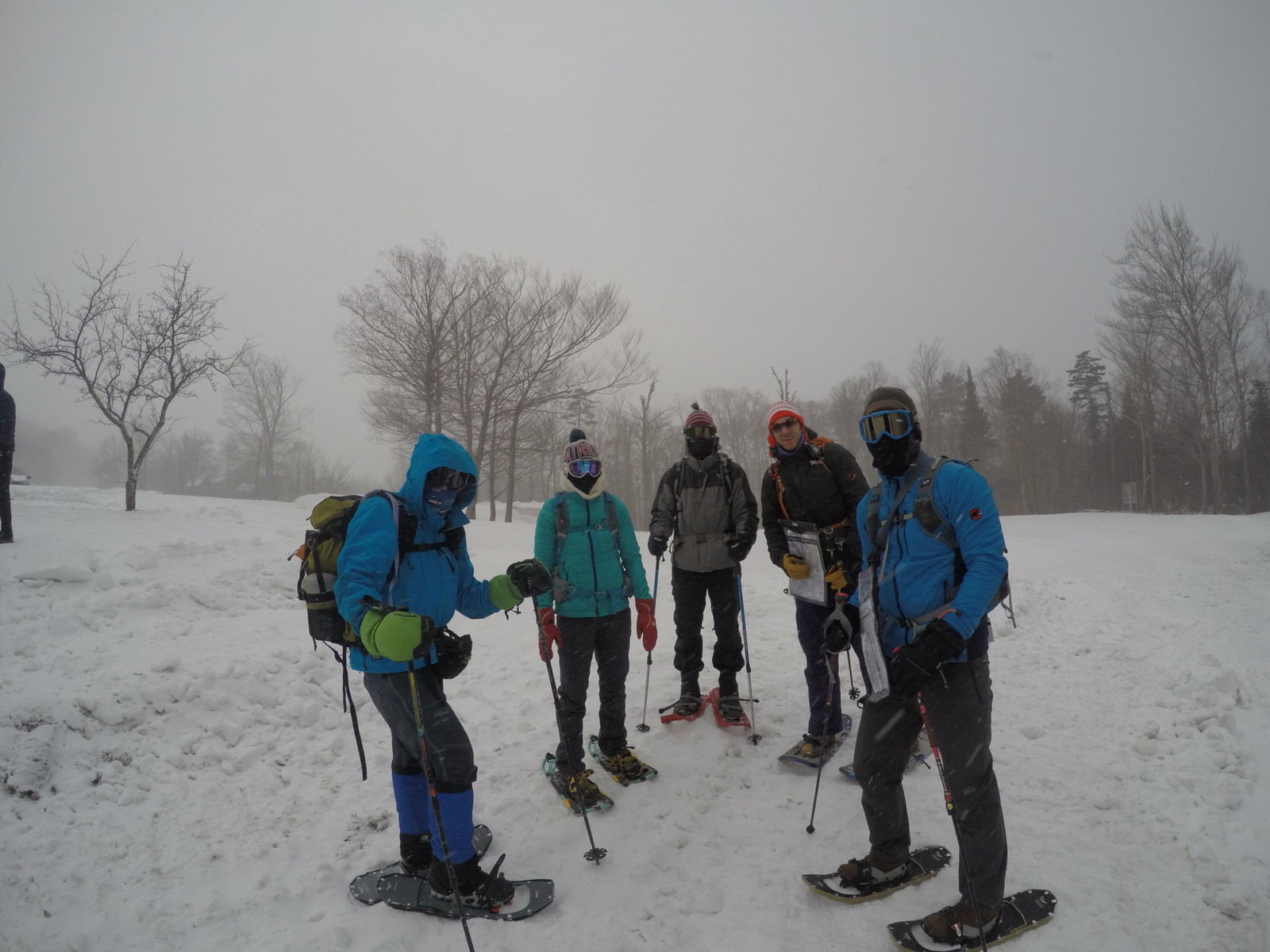 Frigid start to the day

Worth noting the weather actually wasn’t too bad, in fact several folks stripped a layer about 30 minutes into this leg. Amazing how quickly the body heads up even when it’s 0 degrees outside! The only bad part was the wind, every time it picked up it clawed away at the body, and made it almost required to put on goggles and full face mask. Fortunately over the course of the day it only picked up 8 or 9 times, and only for a few minutes at a time, so we were able to go through it. It definitely would have sucked had the wind kept up all day though.

Also it was nice that GMARA was making this race more accessible to new racers. As such, the race started later in the morning so headlamps weren’t needed to start the race which was nice, and many of the CPs were right on trail making it very accessible to newcomers.

Anyway, we got 5, 6, and made our way to CP20, and found what we thought was CP20 in the woods but it looked rather tattered. After punching in and taking a bearing to the next map point we were heading to, it was clear that it was a CP leftover from an old race and we took a bearing to where the real CP20 should be and found it. Then, we made our way up to the Nordic Center, and looked down the hill to where CP4 was, and realized it was about a 200 foot drop down to the river which we’d have to scramble back up, yikes! Of course, we successfully got the CP, made our way up, and then went inside to warm up a bit before hitting the second part of the course. 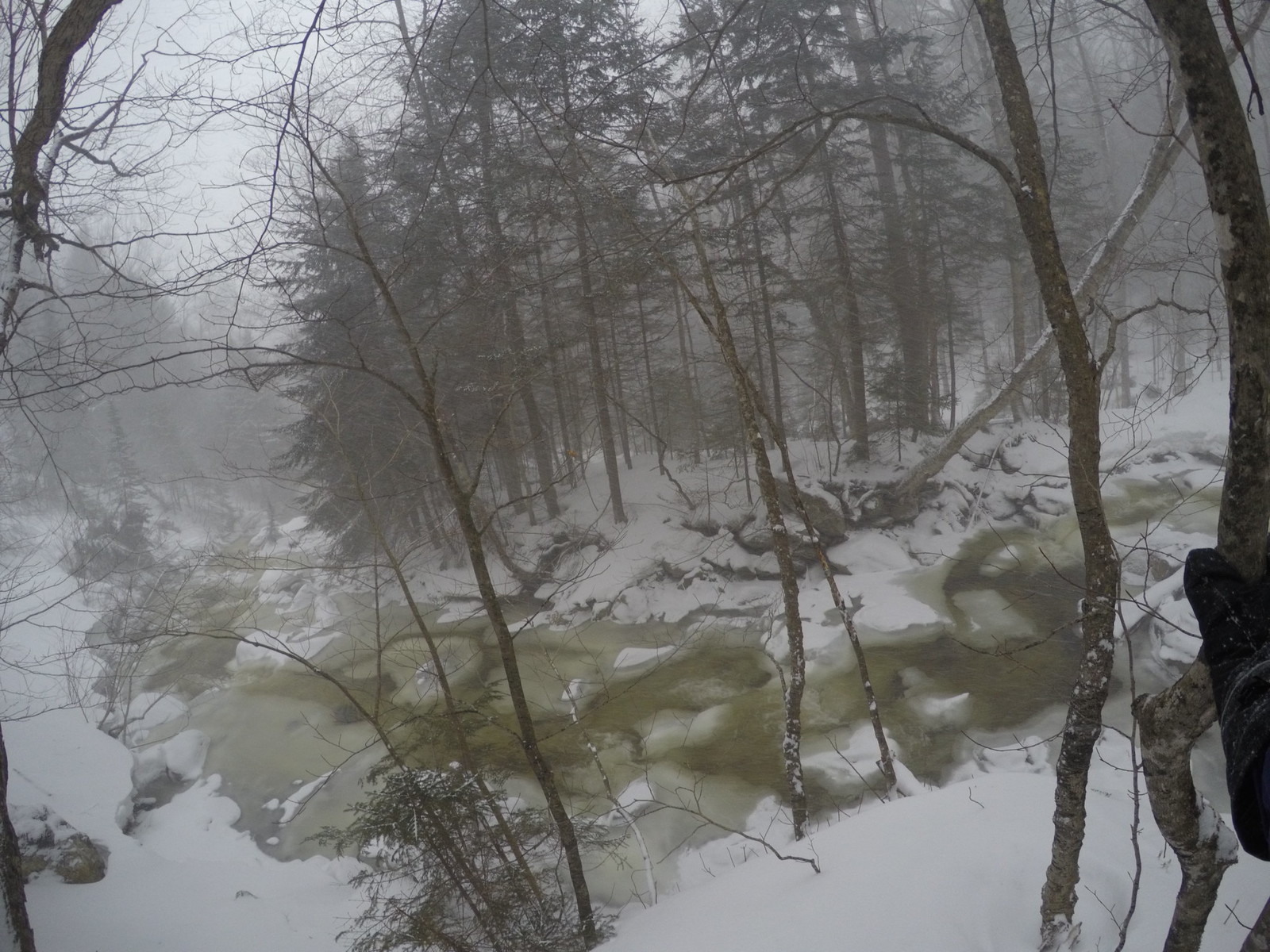 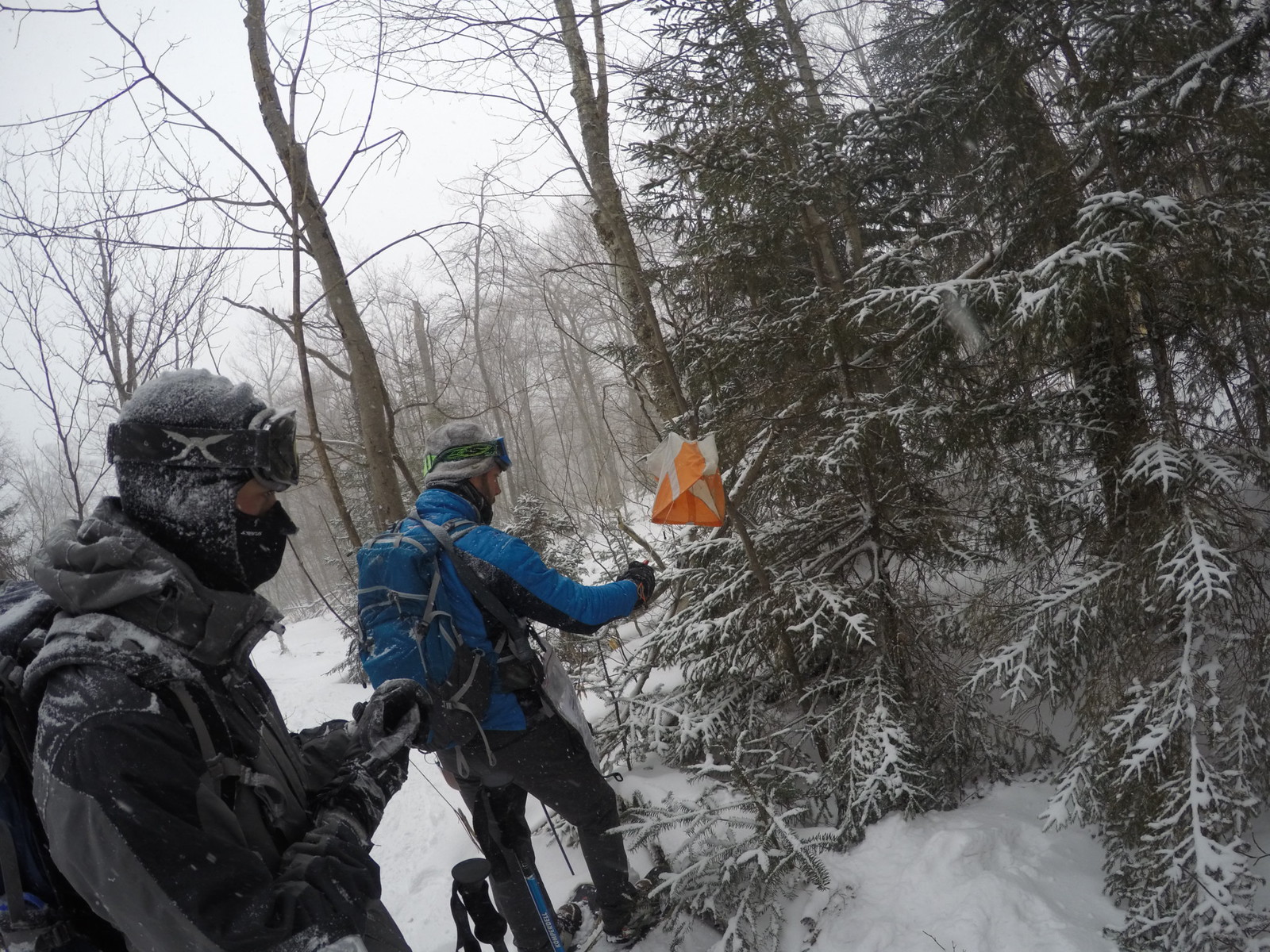 Tattered CP we thought was CP20 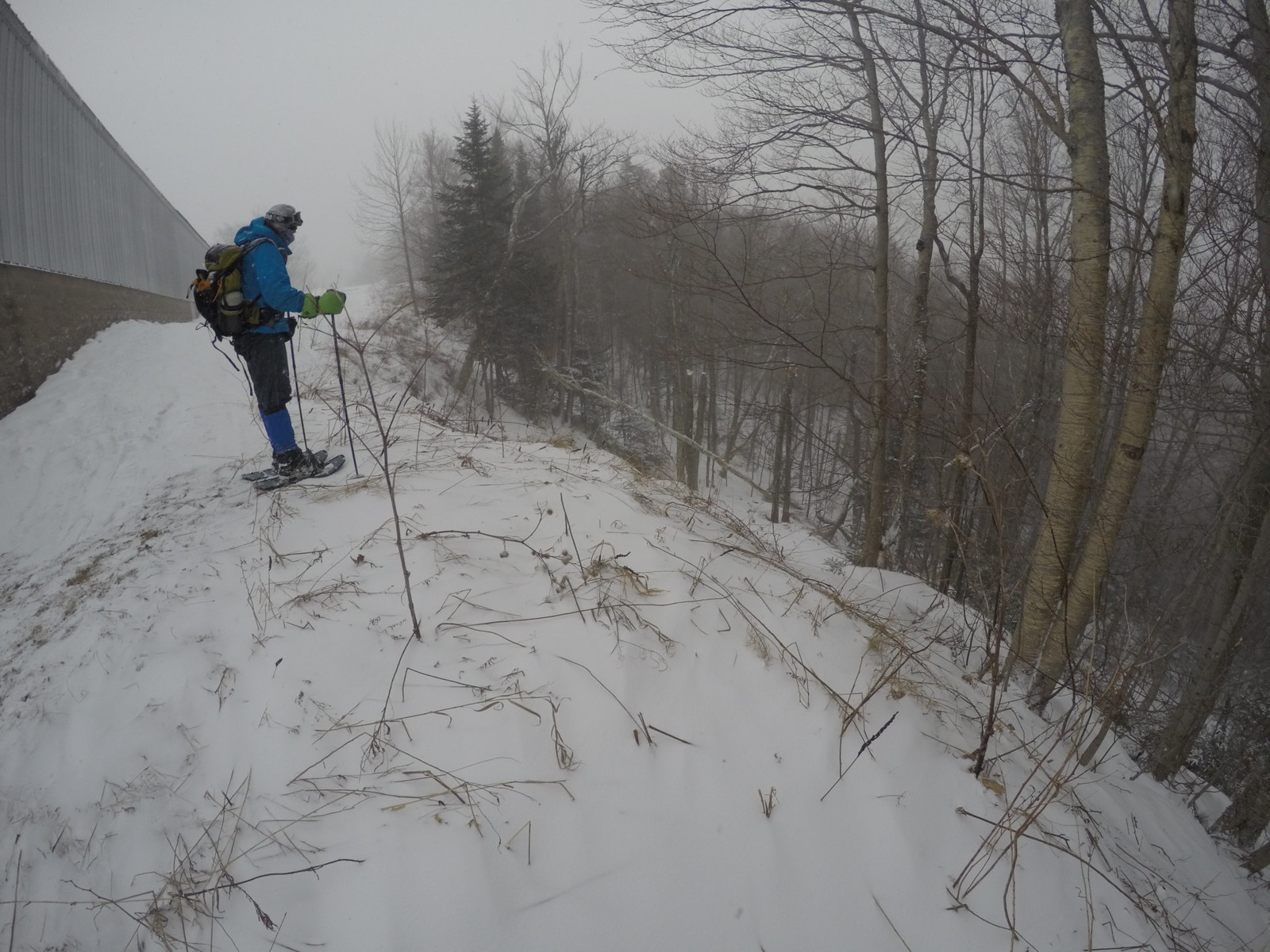 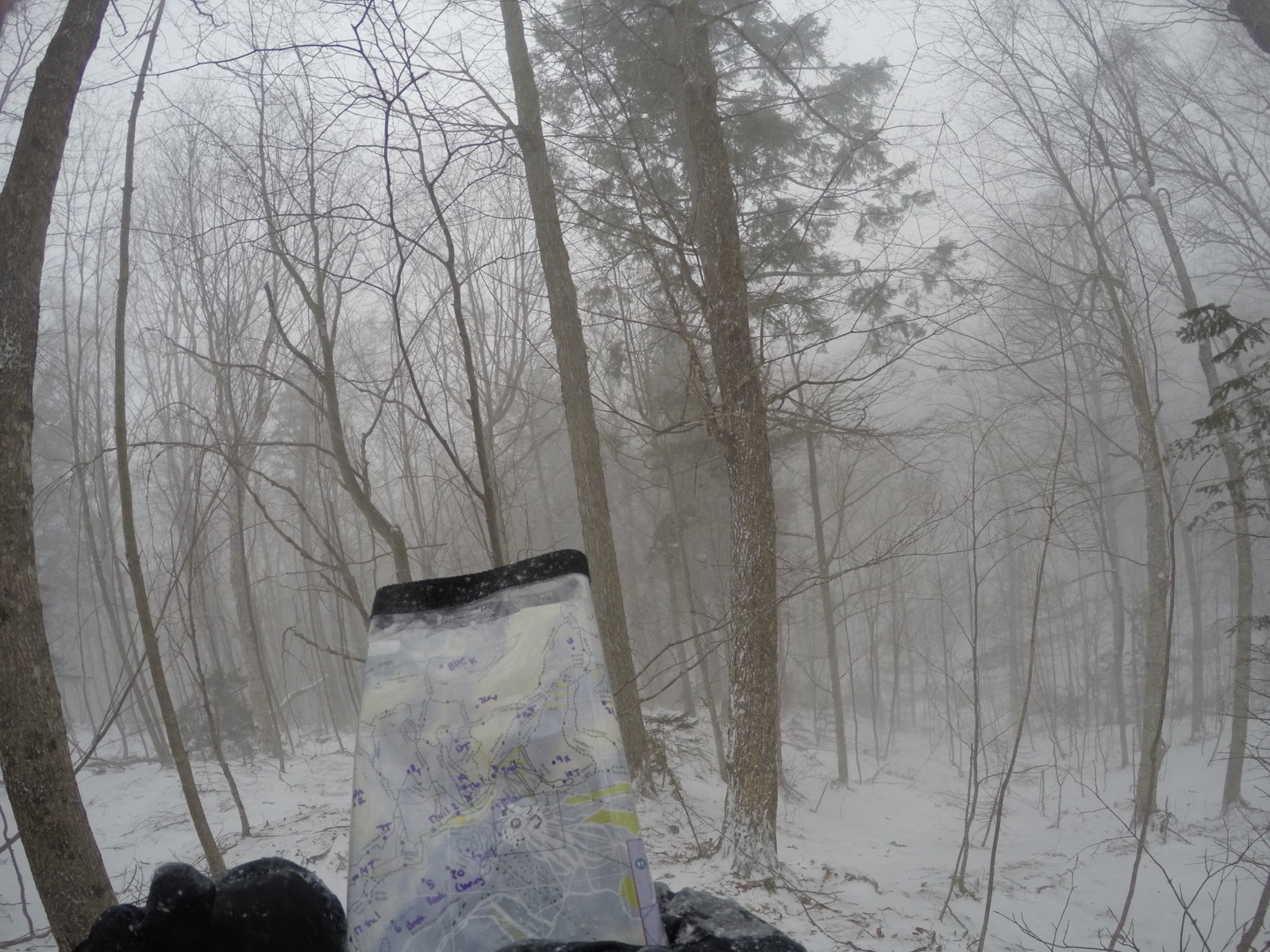 I swear the checkpoint should be here

We took a long break in the TA while some folks worked out some really cold feet issues and re-packed gear for the second part of the day. It was nice to get out of the cold for a bit, and we ran into Kate from Strong Machine who we chatted with while getting prepped. The goal for the afternoon was to tackle 3, 19, 2, and then every CP in clockwise order we could do before 3pm came around. We made good moves and got to 3 and 13 without issue, but took a wrong turn and ended up heading towards CP8 instead of 2. That was ok, and we decided we’d flip our strategy and tackle the higher points on the west part of the map then circle around to the low ones. After getting 8 we decided as a team we’d do some bushwhacking and get BPA which was worth 3 points instead of the usual 1 point for the normal CPs. This was where my nav really started to click, I literally dropped us right on top of the CP by taking a straight bearing and using my altimeter, it always feels good to do that! 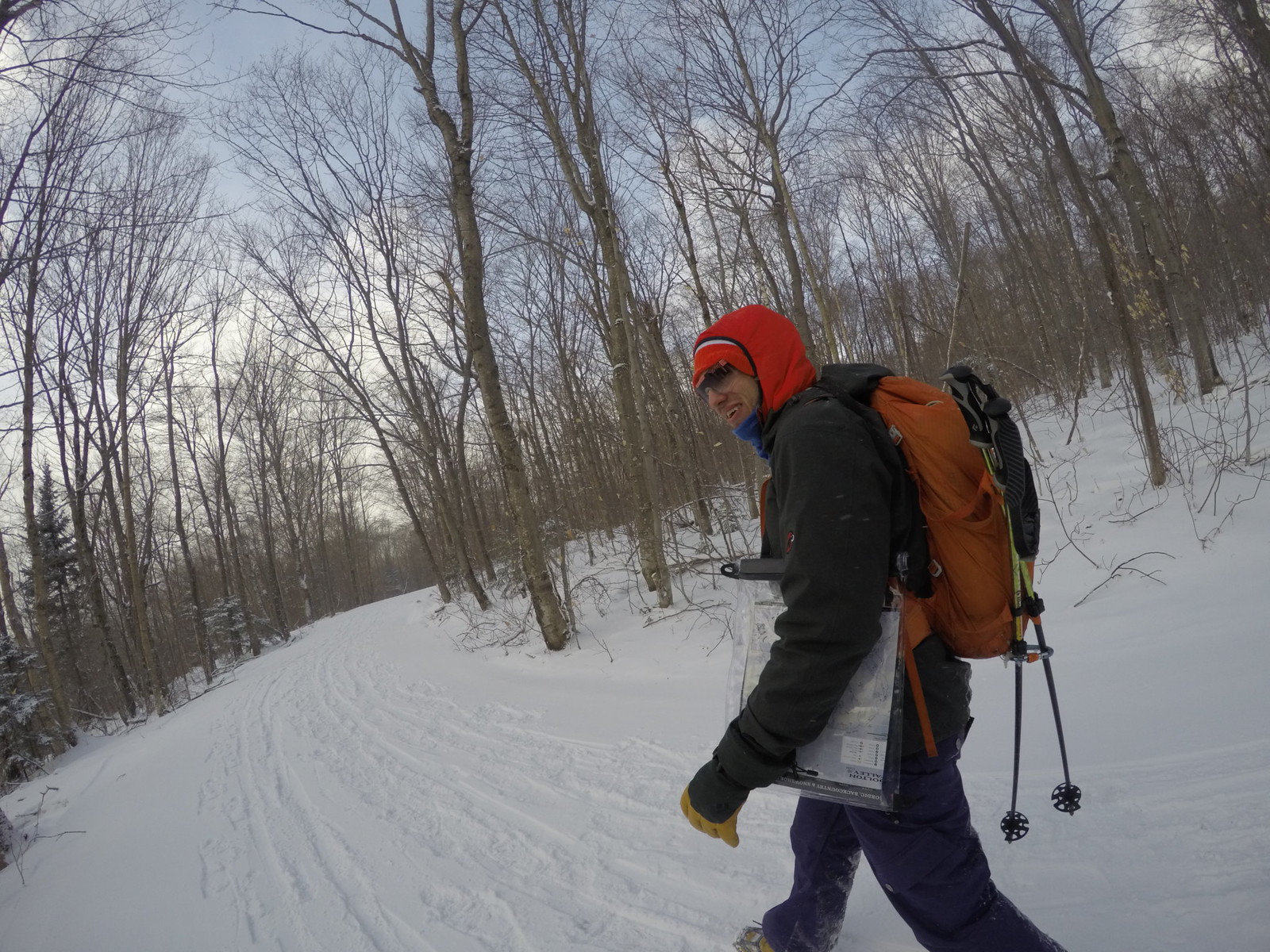 Warming up in the afternoon

And of course, who do we run into at the top of this mountain peak but Evans family competing in the 3-hour race! They were awesome and shared some hot cocoa and tea with us before we punched out and continued on. It was at this point Colleen was getting jealous of the guys stopping and being able to do their business in the woods wherever was convenient, and was strongly wishing she had a “Go-girl” she could use to write her own name in the snow. Next race Colleen, now you know what gear you gotta pick up!

Next up, a straight shot out to CP11 which we hit right on as well which felt great. Only a few precarious ridges to drop down for this one, but it was super fun, the wind was gone, and it was nice and sunny out. 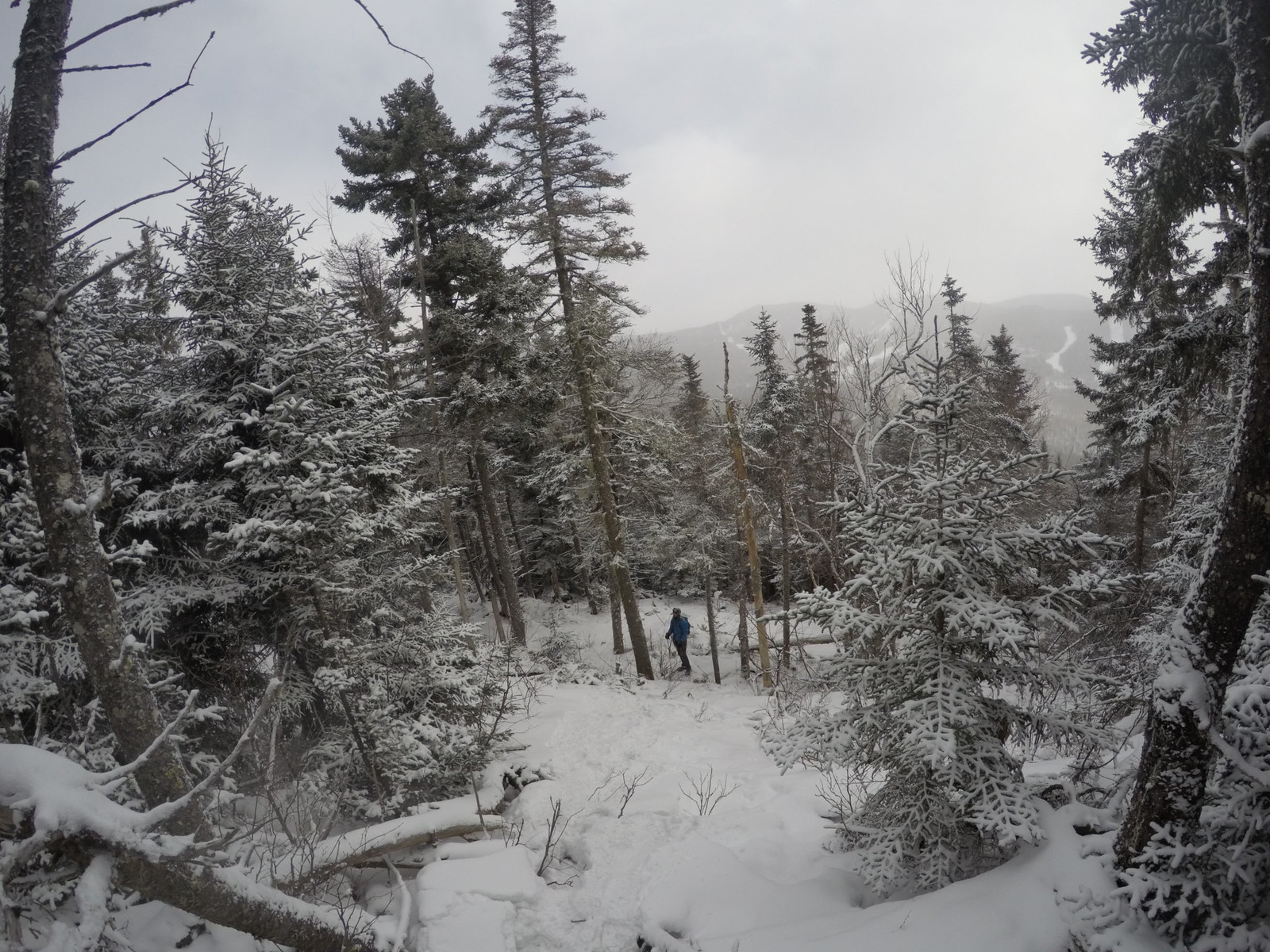 After 11 I handed off the map to Colleen for a bit to nav, and we made our way to 12, 17, 14, and 7 without issue. From 7 we bushwhacked due east to get to CP2, and then started to make our way up to CP13. We know that we were getting close to time at this point, as it was 1:30pm when we hit CP13. Our goal now we to get up to 26, see how hard it was to hit, get that one and then optionally try for BPC, and then do 16, 9 and 10 on the way back. We first tried to approach CP26 from the south which was essentially a straight wall up, and our crew was starting to get tired, so instead we circled back to the west and found an alternative route up to the lookout instead. It was steep, but doable, and had a great view from the top. Unfortunately my GoPro died before we got there otherwise I would have had some great pictures from the top.

It was a great end to the race, and another great GMARA event in general. Rob had a solid time and we’ll definitely be pulling him back into more Chaos Raid events, and Directionally Challenged crushed it as well (with Colleen running nav for some points too!) Evan was spot on with backup nav, offering some alternative routes that were better than my initial plan. It was excellent having him looking at a second map. Can’t wait for next year! 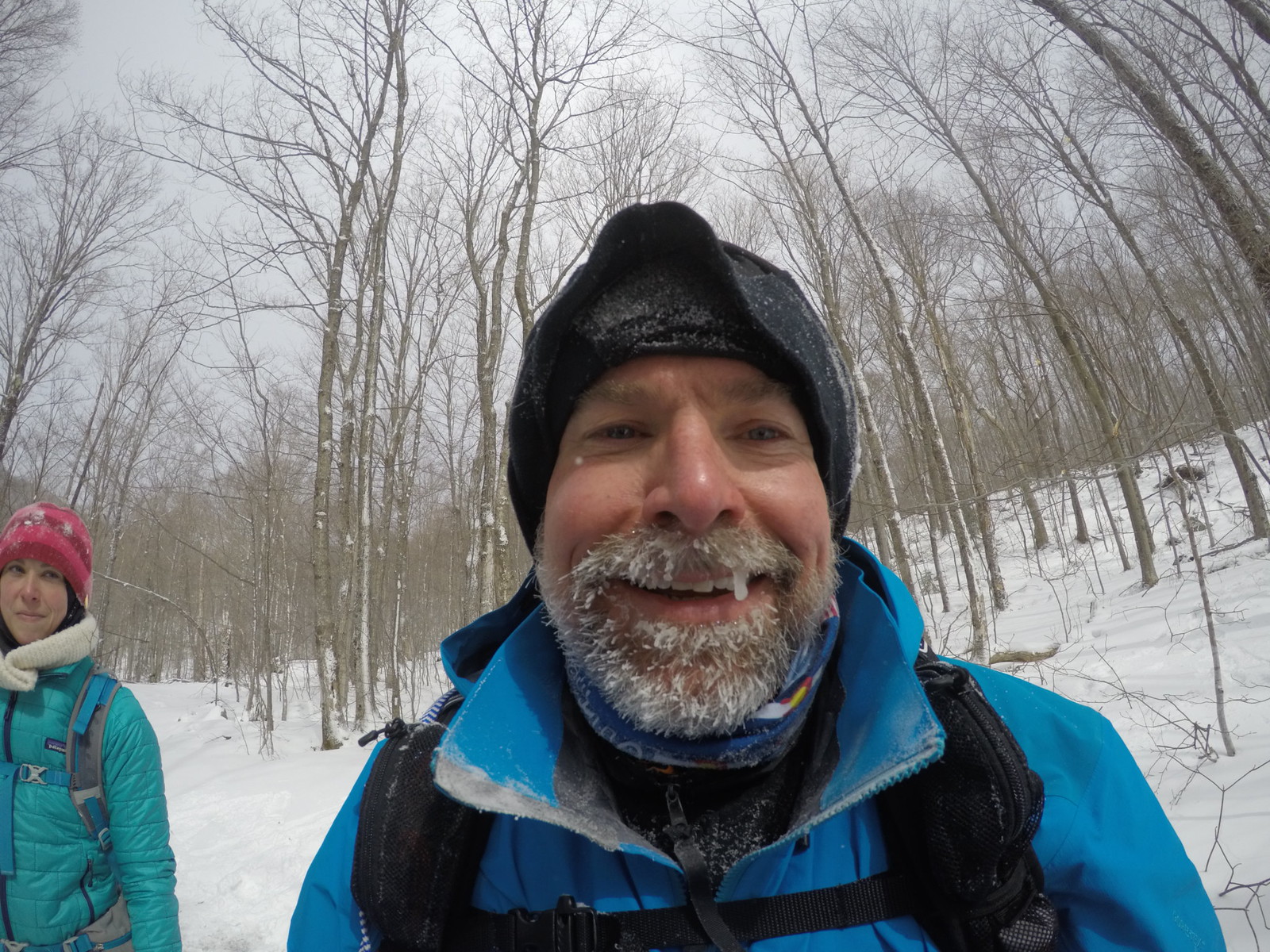 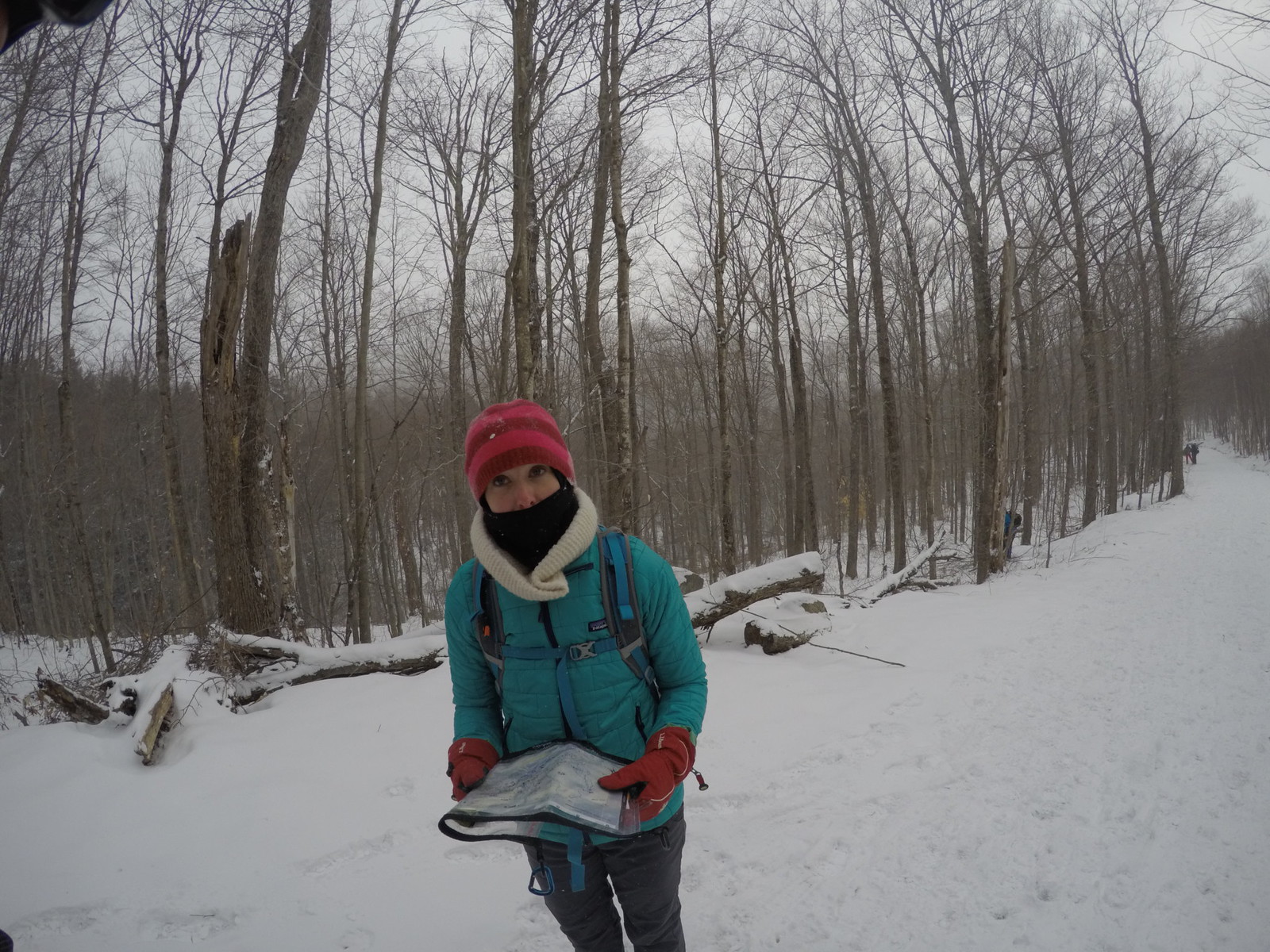 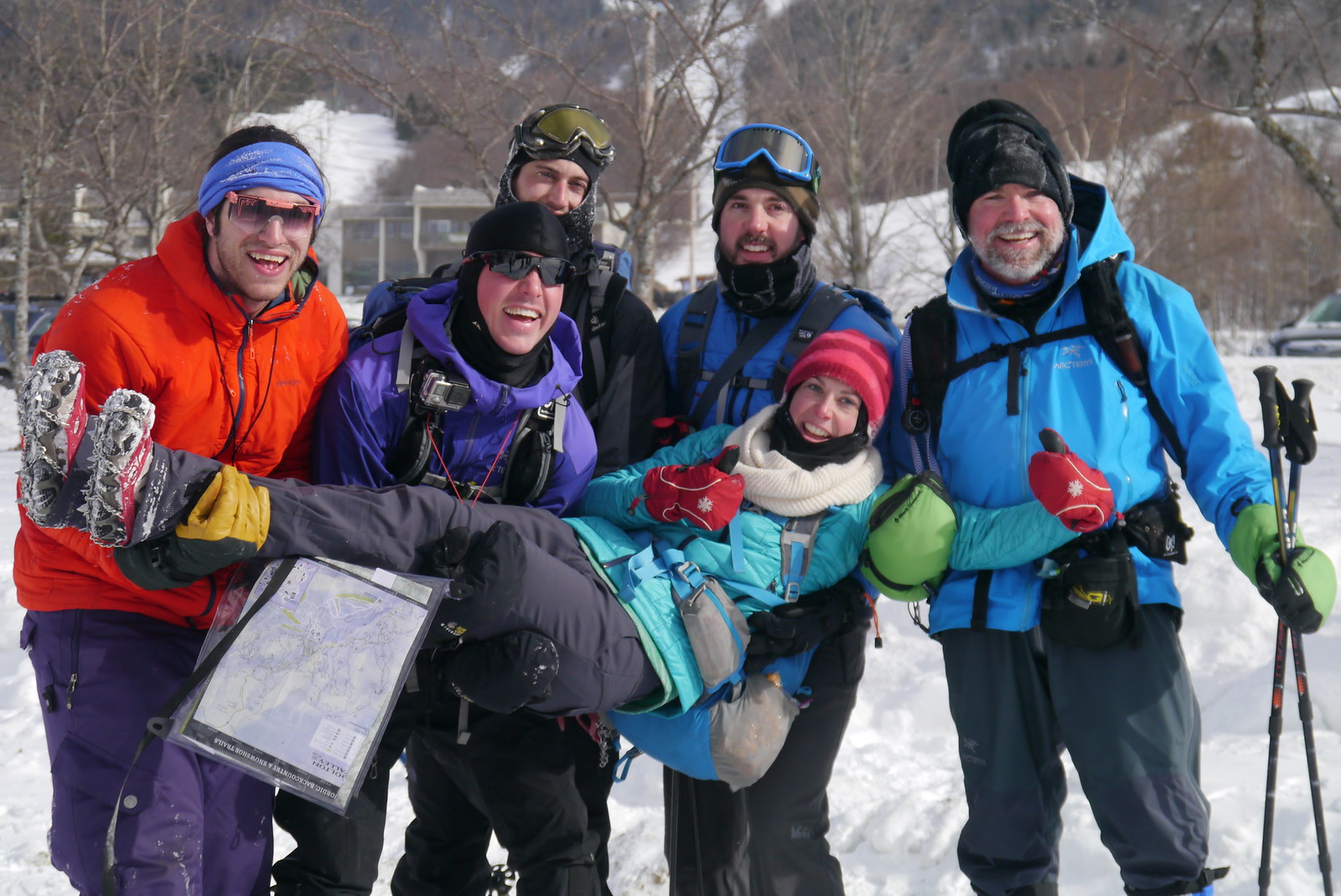 Chaos Raid is a racing team based in Boston, MA. We primarily compete in adventure races around the world, but have competed in ultra-marathons, mountain biking events, and have a general love and enthusiasm for all things outdoors.